This journey starts on a rainy summer day in 2011. I was locked inside, laying in bed, slightly hungover, watching the world outside my room through my Twitter-feed, while listening to damp heavy raindrops dripping down the window. Suddenly I come across a link to a video with what to me was a completely new band called Sulk.

What I then hear when I press play are John Squire-esque guitars, Suede-choirs, a deep bass over a heavy hitting drum, and an overall sound that could be taken straight outta Nowhere by Ride. It was a mash-up of everything I loved. Mixed together it felt new and fresh. I was mesmerized.  The song I was listening to was called Wishes. And I kept listening to it while the leaves switched colour, and those raindrops turned into snowflakes.

The more I listened to Wishes the heavier became my addiction. I needed more, and I needed stronger dosage. I told my friends about this new band and when I realized that they too loved them, the stronger became our friendship. And the stronger became my eagerness to hear more from Sulk. A while after Wishes was released second single Back In Bloom hit the shelves. And me oh my, this was just as good. I bought both singles on 7 vinyl and I even got one of them signed by all band members, as a gift from a lovely lady I saw at the time. Everyone in my circle of trustees knew I was hooked, and there was really no way out but to keep the consumption flow going. 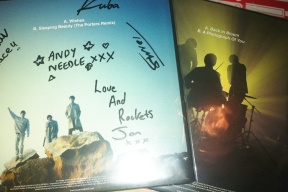 I started searching the net for material. I listened to remixes of the songs, read article after article, followed the band on Facebook and Twitter, watched all the videos I could find from gigs and also from the earlier constellation of the line-up when the band was called The Ruling Class.

Days, weeks, and months went by and all while I was waiting for Sulk to release their long awaited debut album, life happened.

I started to question why no record label had picked them up. Is the music I prefer and listen to that dead? I started questioning my own musical taste. Was I wrong? But how could I be since not only did all my friends love them (the ones which have a musical taste I agree with), they also got the approval from my other peers. Not the ones I have a pint and listen to music with, but the ones that write the music I listen to while I have a pint.

But as 2012 became 2013 Sulk announced that their debut album, titled Graceless, would be released on April 15. My feelings to this surprised me. I did not feel the happiness and relief I had believed I would. Rather I felt a feeling of emptiness and fear. Is this it? Is the journey over now? And what if the record is shit? Obviously I pre-ordered the record, both on vinyl and CD, and when I came home after work on Monday, April 15, postman Pat had delivered it to me. I opened the same window I had been staring out of when I first heard the band in the summer of 2011, almost 20 months ago. This time the sun was shining. I pressed play.

So was it any good? Well, that you’re gonna have to figure out for yourselves. But I will tell you this, it was well worth the journey getting there.

America is outraged. The largest and highest CPV (celebrities per visitor) numbered festival in the country, the Coachella festival, is headlined by The Stone Roses. I think it’s a blessing but the 20-something hipsters and Average Joe’s in the U.S. think it is an absolute disgrace. Don’t they love guitar driven Madchester music with songs so catchy and monumental it’s doubt-able we’ll hear anything like it in the future? No they don’t, in fact they’ve never heard of it. Instead of cheers and an extreme eagerness for the festival to start the Americans are now asking: Who are the Stone Roses?

Since the news arrived that Manchester band The Stone Roses will headline the Coachella festival in April of 2013 Twitter has been flooded with outcries and honest questions on who and what The Stone Roses in fact are. The hashtag #whoarethestoneroses has gathered the best (or the worst, depending on how you look at it) tweets on the topic.

When I was reading the tweets on the matter yesterday I remembered my first interaction on the topic of Stone Roses vs. America. It was in 2007 and I was playing collegiate soccer in Jacksonville, FL. It was the first season with my new team (I had played two seasons with University of South Carolina prior to my move to Florida) and I loved it all. My team mates were amazing and the weather was even better, the next day was just as exciting as the one before. Life was good. Reminiscing about it now I highly doubt I’ll ever be in an happier place than when I was living college life and playing sports in America. But one experience was awful. It was the one when my two worlds collided. The people I loved vs. the music I loved.

Prior to each season all players in the squad gathered to make a warm-up tape. This warm-up tape was to be played one hour before the game would start, when all players were on the pitch warming up. It also gave a boost to the atmosphere and surroundings since everyone in the stands could listen to the music. Each player got to pick one tune for the record. We had a few days to decide before we at one practice would play the CD in the locker room before a session.
I decided to pick the song Waterfall by The Stone Roses. It’s not an up-tempo song but it gives me an enormous sense of well-being. The cooling sound of the first note, the guitar-intro that feels like a giant ship slowly conquering a cold dark sea, the soothing voice of Ian Brown when he sings the opening line: “Chimes sing Sunday morn, today’s the day she sworn…” I just love this song and it puts me in a great mood.

The reactions in the locker room when my song started was shocking. “What the fuck is this?” “Who would want to listen to THIS before a game?” “What band is this?”. It was completely awful.  A disgrace. Anyone can talk shit about me, but don’t talk shit about my music.
“They are called the The Stone Roses”, I told my bewildered teammates.
The room got quiet for a few seconds before a striker in the squad said: “Who are the Stone Roses?”.
“They are from Manchester, England, and I consider them one of the best bands in the world”, I quickly said before I left the room to go out and get my ankle taped. But it wasn’t my foot that had been hurt, it was my heart. And my ego.

I remember that the song, even with all the critic, stayed on the warm-up tape and before each home game that season I got to hear it, and everyone else had to listen to it. I don’t know if it grew on my teammates, or the people in the stands, because I never spoke to anyone about it. I remember thinking it was a lost cause. Americans don’t like this kind of music. They rather see a dead rapper spitting out some rhymes via old recordings through a hologram than to watch and listen to this kind of music. It was sad to me then.

But hey, everyone’s different, and places are different. And isn’t that lovely in its own little way.

Different worlds will always be colliding, that’s just a fact. Let’s cherish it instead of argue about it. The Roses headlining Coachella is far more interesting than if they would play three more gigs at Heaton Park or headlined Glastonbury for instance. In England they are already huge, for fuck sake, there is even a cover band called The Clone Roses that fills up arenas all over that lovely island.

Now we will see something special. And new people will be able to listen to a band they have barely heard of. It’s a daring move and it might turn to shits. But hey, at least it is unique and unexpected.

So when Ian, John, Mani, and Reni conquers the main stage at Coachella in front of thousands of Americans and play their mega tunes they might not be in their natural habitat. But I am certain that some people watching the gig will enjoy it immensely. Why wouldn’t they? They are watching The Mighty Stone Roses after all. And that’s who they are.

Out and about with Stone Roses bass guitarist Mani and my mate Jimmy in Stockholm, 2011.

Watching The Stone Roses live at Hultsfred, Sweden, in 2012.