It was late November in 2007 and the rain was falling down. My college soccer team Jacksonville University had just ended the season with a loss and Thanksgiving was only one week away. With the season coming to an end all players looked forward to enjoy a long weekend at home with their respective families. As international student athletes in the United States my Swedish friend Stefan and I were invited to our team-mate Jordan’s family home to celebrate Thanksgiving with him and his family – The Stantons. Jennifer, Dave, Jordan, Ross, Claire, and Anna embraced us with such hospitality and generosity. During that weekend we were really thankful for being able and invited to be there and to take part in this great American family tradition. It was a weekend of great fun and food. And friendship that would last for a lifetime.

Merl Jefferson McBee Jr. was a close friend to the Stanton Family and had coached Ross in debate and Jordan in soccer. Merl didn’t have a wife or any children but he played just as big part in the Stanton Family as Jennifer, Dave, Jordan, Ross, Claire, and Anna.

Merl took a liking to Stefan and I right away during that Thanksgiving weekend. He thought it was fun that we were from a place so far away. An avid globetrotter himself Merl had traveled the world many times but never made it to Scandinavia. That was about to change. He also enjoyed the fact that we were playing soccer (he refused to call it football) with his old friend and “brother” Jordan.

After that Thanksgiving weekend Merl and I kept in touch. We exchanged e-mails and being a senior citizen with plenty of time on his hands Merl was able to watch our team Jacksonville University play a few games during the season that was to follow.

A lot of people asked Jordan, Stefan, and I who this “old” man was and why we were friends with him. We explained the story behind it all, how we had met, and what a great person Merl was. Some people still thought it was weird and some thought it was funny. And perhaps it was. But you learn a lot from people that has lived for 70 odd years in comparison to the usual 20-something talking heads you have a dialogue with on a daily basis.

In 2008 we once again celebrated Thanksgiving in Kentucky with the Stanton family. Merl was of course present and I remember that we all visited his condo. He was so proud of his movie collection and his extremely huge television. To this day it is still the largest TV I have ever seen. I’ve been to movie theaters that had smaller screens than that one. We watched “I’m Not There” – the movie about Bob Dylan. Merl didn’t like Dylan. Nor did he like The Beatles or Springsteen. We really didn’t have that many popular culture references in common. Merl liked history. He was a very religious person and his favorite contemporary President was George W. Bush. In many ways we were each others complete opposites. But it didn’t matter. Our friendship continued and Merl kept sending those e-mails every week updating me on his life and I kept sending mine back. Not as long, not as detailed, but it was such a great tradition we had. A tradition that would last for over five years.

In 2009 Merl visited Stockholm and Sweden. He spent ten days in Stockholm and he loved it. My brother and I took care of him during these days and Merl got to go to a lot of restaurants, meet many of our friends, spend time in museums, and visit the Royal Palace. Which he loved immensely. He even got interviewed by the largest daily newspaper in Sweden, Dagens Nyheter, about his time in Sweden. He said he liked it “but it was too expensive”.

Perhaps he was thinking about the dinner we had at TGI Friday’s. We were a gathering of around seven people and Merl, as the generous man he is, offered to pay the bill.
When the dinner was over and the bill came Merl looked extremely surprised. He was in shock. The bill of 2000 Swedish Kronors was in Merl’s mind a bill of 2000 American Dollars. Since he knew TGI Friday’s was an american restaurant he expected the bill to be in dollars. It was just the next day when he finally asked us that we could ease him down by saying: “Yeah Tiger, it was expensive, but not that expensive”.

During that week Merl was very specific that we were to call him Tiger when we spoke to him or called for him. The tiger was his favorite animal and he didn’t really have a liking for his name. He said it was okay to call him Merl but when we spoke directly to him he wanted to be called Tiger. Of course we all said. You are Tiger.

Tiger, sleep tight. I’m going to miss your e-mails, your phone-calls, your kind letters, your updates on Facebook, and everything you have done for me, my family, and my friends. But most of all I am going to miss you – a dear dear friend. 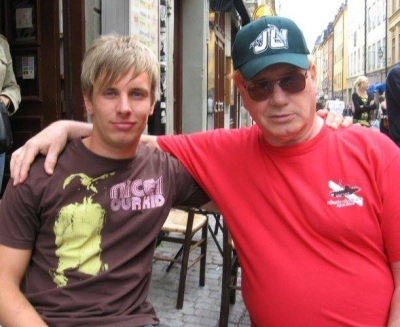 Update: Here is a picture from Merl’s funeral with some of his friends wearing some of the many hats that he used to wear. A very beautiful photo. 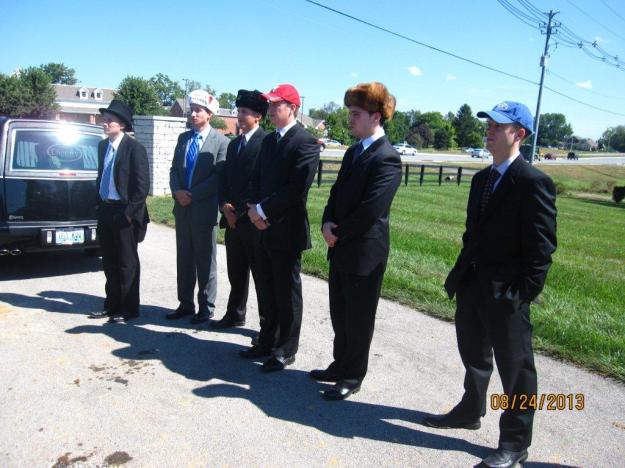 4 thoughts on “To Tiger”